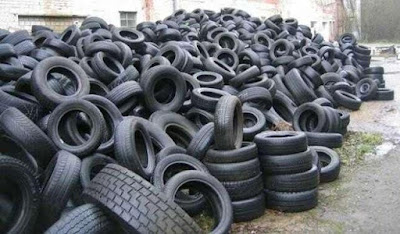 Two Chinese, Tanlong Shen and Xu Jing Yao, have been arrested by the Standard Organisation of Nigeria, SON, for importing substandard tyrs believed to be worth over N5billion.

This was made known by the SON Director General, Osita Aboloma, as he led journalists on a tour of the warehouse in Satellite Town, Lagos, where two million imported substandard tires were seen.

The Chinese reportedly import the tires into the country through means that compromise their quality, thereby churning out weak, substandard tyres which endanger the lives of people.

Not only were the tyres of poor quality, their manufacturing dates were also post-dated to make them appear new and road worthy. It was revealed that the Chinese distributed fake tyres under different brand names like; Grandsonte, City Tour, Duraturn, Aptany, Powertrac, City Grand, Bearway and more.

The Chinese were apprehended with the aid of intelligence received from well meaning Nigerians, which helped the SON Directorate of Compliance to intercept one of the trucks belonging to the Chinese and track it to lead them to the rest.

While speaking to journalists, Aboloma said;

“We acted on the intelligence we received from well meaning Nigerians. This was achieved as a result of inter-agency collaboration. The glory is not for SON alone.

“You can see volume of tyres brought in and you can imagine the implication for our society if these tyres are let into the market.”

Just last year, the FRSC reported that the use of fake and expired tyres is responsible for more than 3,000 road traffic accidents that occurred in the last five years, with vehicle owners and drivers caught with expired tyres. At the time, the Assistant Corps Marshal in charge of Policy, Research and Statistics, Dr. Kayode Olagunju, had spoken on the dangers of using substandard tyres, saying;