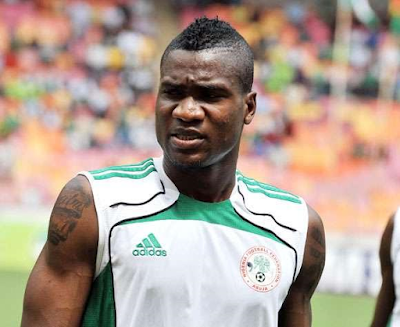 Chinese club, Tianjin Teda, who newly signed Super Eagles captain, John Mikel Obi, have tabled a mouth watering Multi-million Pound offer to Ideye, Mikel’s teammate at the Super Eagles, and he is currently undergoing negotiations to complete the deal according to reports from ESPN. The report reads:

Tianjin Teda have been searching for a new striker to finalise their squad ahead of the new season kicking off and have targeted a move for Nigeria international Ideye.

Ideye has been at Olympiakos since the summer of 2015 after joining the club following a disappointing one-year spell in the Premier League with West Bromwich Albion.The 28-year-old was West Brom’s then-record club signing when he joined them in 2014 from Dynamo Kiev, but he failed to hit the heights at the Hawthorns.

Ideye scored seven goals in 31 appearances in all competitions for West Brom before he left to join Olympiakos, and he has got his career back in track in Greece.

The powerful striker scored 13 goals in his debut season to help Olympiakos win the Greek Super League and he has surpassed that this season with 15 goals in all competitions.

Tianjin Teda have made an offer to Olympiacos for Ideye, sources said, adding that they have already agreed personal terms with the player over the possible move.

Tianjin Teda signed Ideye’s Nigerian teammate John Obi Mikel from Chelsea during the January transfer window and they are now hoping to add Ideye as their latest marquee signing.