Nurses and medical assistants fighting the Ebola outbreak in Liberia have largely ignored a call to strike over danger money and conditions.

Most health workers were working as normal on Monday, the BBC’s Jonathan Paye-Layleh in Monrovia said.

Liberia is the country hit hardest by the deadliest ever Ebola outbreak.

Health workers are among those most at risk of catching the disease. Ninety-five have died from the virus in Liberia.

The latest outbreak has killed more than 4,000 people in Liberia, Sierra Leone, Guinea and Nigeria since it was identified in March.

“I have never seen an infectious disease contribute so strongly to potential state failure,” she said in a speech delivered on her behalf at a health conference in the Philippines.

In the US, President Barack Obama has directed more steps to be taken to ensure high safety procedures when dealing with suspected Ebola patients, after a health worker treating an Ebola victim caught the virus.

Liberia’s National Health Workers Association, a union, had called the strike to demand an increase in the monthly risk fee paid to those treating Ebola cases.

The association also wants more protective equipment and insurance for workers, and has accused the government of not providing enough protection from the virus.

On Monday, the association’s secretary-general, George Williams, said the government had put some health workers under “duress” and persuaded them to work.

Liberia’s Assistant Health Minister Tolbert Nyenswah said a strike would have negative consequences on those suffering from Ebola and would adversely affect progress made so far.

The government says the scale of the epidemic means it now cannot afford the risk fee originally agreed.

“We are working with them the best way we possibly can, so that they understand we should have a common interest in saving lives by fighting this disease,” Mr Brown said. 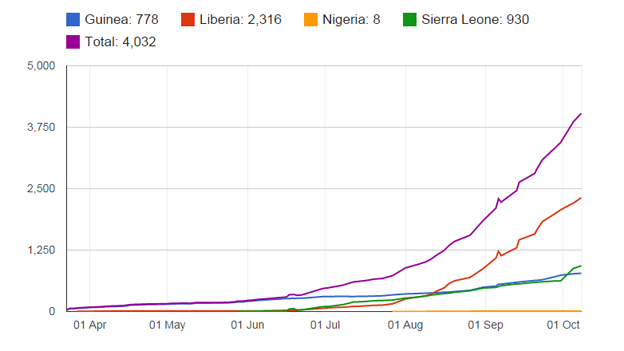 Note: figures have occasionally been revised down as suspected or probable cases are found to be unrelated to Ebola. They do not include one death in the US recorded on 8 October.