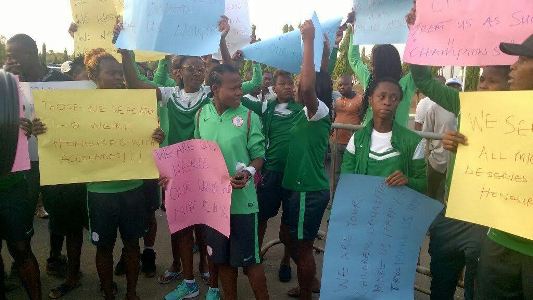 The Federal Government, following orders from President Buhari, today released the sum of N471.8 million to pay the Super Falcons and Super Eagles following their AWCON 2016 win and 2018 World cup qualifiers respectively.
What almost turned to a national embarrassment after the Falcons players protested in Abuja on Wednesday following their 2016  African Women’s Cup of Nations win in Yaounde, has now been resolved as the office of the Accountant General of the Federation released the mandate to Central Bank of Nigeria for payment of naira equivalent of US$1,173,820.00 at N305/$ to Nigeria Football Federation.
Minister of Finance, Kemi Adeosun, approved the payment, which is a sum of N358 million for the Super Falcons while the sum of N113.8 million has also been released by the Office of Accountant General of the Federation for the Super Eagles. The players will be paid today, Friday.
Share on:
WhatsApp
0
Share FacebookTwitterWhatsAppLinkedinGoogle+Email