Gambia Elections: I Will declare myself president if Jammeh hangs on – Adama Barrow 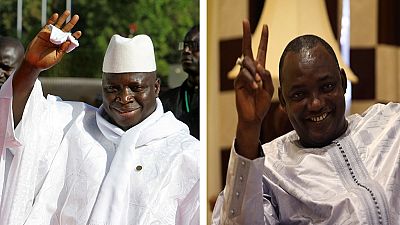 Gambia’s president-elect, Adama Barrow, has hinted that he will swear himself in as substantive president when the tenure of outgoing Yahya Jammeh runs out in January.

The businessman who run on the ticket of an opposition coalition won the December 1 polls beating Jammeh who has been in power since 1994.

Barrow told the BBC’s reporter who covered the elections, Umaru Fofana that Jammeh’s tenure ends on January 18 and he will declare himself president if Jammeh does not step down.

Our position is very very clear. I’m President-elect, we advise the president to cooperate. We have a team that is working on our inauguration. We are working on it; on the 18th, I’m the legal president of this country.

“Our position is very very clear. I’m President-elect, we advise the president to cooperate. We have a team that is working on our inauguration. We are working on it; on the 18th, I’m the legal president of this country,” Barrow said

Jammeh on December 2, a day after the polls surprisingly accepted defeat and called to congratulate Barrow on his victory with the firm promise to hand over and return to his village to farm.

A week later, Jammeh announced on the public broadcaster that he was not stepping down. According to him, the elections he lost were fraught with irregularities which his team got to know of later. He subsequently called for a rerun of the polls.

He received a lot of local and international flack for his U-turn. The regional political bloc, the Economic Commission of West African States (ECOWAS), the African Union (AU) and the United Nations (UN) led in condemnation of his new position. The Gambia’s only landed neighbour Senegal also joined in the condemnation.

Back at home, the opposition parties have chided Jammeh calling for him to step down immediately. Different groups in the country have joined in, media people, health workers, teachers, lawyers and other professional groups continue to call for him to respect the will of the Gambian electorate.

Security personnel on Tuesday took over the headquarters of the Independent Electoral Commission (IEC) on the same day when African Heads of State were meeting with Jammeh to get him to step down. That meeting according to Liberian president Ellen Johnson Sirleaf ended in a stalemate.

That same evening, Jammeh’s party filed documents with the Supreme Court asking for the annulment of the elections of December 1 citing among others, irregularities by the IEC and intimidation of its supporters.

Over 17,000 are estimated to be child Soldiers in South Sudanese