‘I Inherited A Mess,’ President Trump Says, Defending His Performance 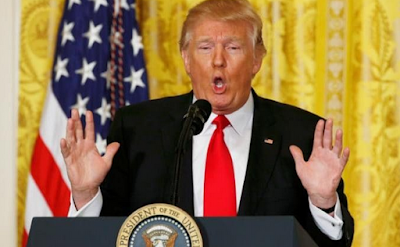 Donald Trump launched an extraordinary attack on the news media on Thursday afternoon in a wide-ranging, wild 75-minute press conference.

Mr Trump insisted that his team was running “like a fine-tuned machine” and lampooned the mainstream media that he said was peddling “fake news”.

“I open the paper and I see stories of chaos, chaos,” he said. “It’s the exact opposite. This administration is running like a fine-tuned machine, despite not being able to get my cabinet approved.”

The US president  said reports in the media about his administration’s relationship with Russia may make it difficult for him to strike a deal with Vladimir Putin to ease tensions between Washington and Moscow.

“Putin probably assumes that he can’t make a deal with me any more because politically it would be unpopular for a politician to make a deal,” he said.

Mr Trump argued that “nobody that I know of” on his campaign staff contacted Russian officials. He repeatedly denied having links with Russia, a claim he deemed “fake news”.

It was also announced by the justice department on Thursday afternoon that the president’s executive order suspending travel from seven Muslim-majority countries would be replaced “in the near future”.

In the press conference, Mr Trump defended the rocky rollout of his travel ban, which judges have put on hold while they weigh its legality. He called the rollout “very smooth” and “perfect” but says it ran into “a bad court”.

Mr Trump insisted that he had inherited a “seriously divided” country. He said that “this isn’t Donald Trump that divided a nation”:

“It’s a mess. At home and abroad, a mess. Jobs are pouring out of the country,” he said.

He also stated he would be announcing his replacement for Obamacare in early March.

“We’re doing Obamacare, we’re in the final stages,” he said. “So we will be submitting sometime in early March, mid-March.”

Wenger to leave Arsenal this season?