Most people haven’t really heard of Stephen Miller, the 31 year old Senior White House adviser and Trump’s speech writer who’s behind Donald Trump’s Immigration ban, but with the constant criticism following the new law, his name is sure going to ring bells in the ears of White House political observers and the American populace a lot longer. 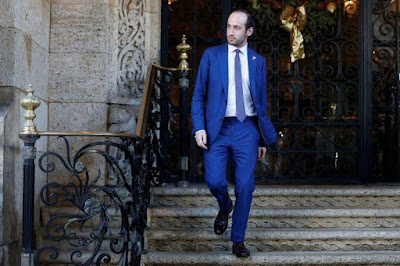 Miller who isn’t even an elected White House executive is the one who seriously pushed for the executive order temporarily banning immigrants and refugees from seven Muslim-majority countries and reportedly instructs Trump on a lot of White House policies.

1.  Miller, just like Trump is a very ambitious young man, and at the age of 31, his foray into politics and most especially the White House has been spectacular and alarming to say the least. He was once Jeff Sessions aide and could be reunited with the senator if he’s confirmed as the Attorney General of the United States. 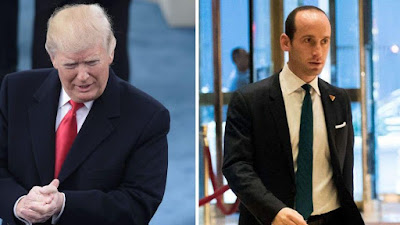 Miller, spurred by his ambition of greatness, he approached Trump’s campaign team in June 2015, promising them that with him on board they have a high chance of defeating an Obama/Clinton controlled Washington.
He was officially appointed as a senior adviser of Trump’s campaign in January 2016, Trump was seriously impressed by Miller and then promoted him to top policy maker and his only speech writer.
He normally fired up the crowd before Trump’s campaign rally speeches with words like: ”
Those in power want to keep you down, but Donald Trump is here to raise you up.
“Everybody who stands against Donald Trump are the people who’ve been running this country into the ground,”
“Everything that is wrong with this country today, the people opposing Donald J. Trump are responsible for.”
2. He was raised in a Jewish and Democratic family, but after the 9/11 attacks and inspiration from Wayne LaPierre’s 1994 book, “Guns, Crime, and Freedom”, he decided to ditch his faily’s political orientation while still in high school and even challenged different political doctrines in his college days.
While in school he was annoyed with government’s acceptance of gays and reportedly said: “just in case your son or daughter decides at their tender age that they are gay, we have a club … that will gladly help foster their homosexuality.”
After graduating from High-school, Miller published a column titled “How I Changed My Left-Wing High School.”
And on his bio, he wrote : “Stephen Miller, 17 years old, just graduated from Santa Monica High School,”
“Since his Junior year in High School, he has been a guest on local and national radio over thirty times.”
3. Just like Trump, Miller is a far-right, anti-immigration, anti-free-trade nationalism activist and propeller. He is obsessed with perfection and believes in his own ability more than anyone or anything else. He’s an excessive self-promoter, and is great at attracting attention and creating a ‘dynamic’ brand and imagery of himself by creating controversies.
According to CNN, Miller’s high school classmate, Adrian Karima, a 31 year old lawyer, Miller made a name for himself in school by challenging his teachers and presenting his conservative views with the predominantly left-leaning student body. At one point in time he even  complained that his school which had a sizeable African-American and Hispanic population — was trying to indoctrinate students.
“He saw it as being outnumbered in Santa Monica, trying to preserve any idea of Americanism that he felt, particularly by pushing English-speaking first.”
“Stephen’s whole view of immigration stems from high school,”
“His negative views of immigration started in high school and just grew over time.”
4. He wouldn’t mind provoking people, or denouncing popular beliefs or thought patterns, as far as his thoughts and views were listened to, he was fine.
For instance, Bannon and Miller (Trump calls them ‘my two Steves) not only created Trump’s controversial travel ban; Miller spent Saturday/Sunday directing how the law would be implemented, overruling Homeland Security officials and insisting, that green card holders would also be barred from entering the country unless they are granted waivers on a case-by-case basis.
“He was very businesslike about it. … It smacked of architecture, like he intentionally provoked people, and it worked for him because he was making a name for himself.” an article on Politicio.com said about him.
Aged 16, he wrote a very long editorial in high school that had statements like “very few, if any, Hispanic students make it to honors classes because the school provides a “crutch” to those who don’t speak English by ensuring all announcements are written in both Spanish and English.”
“Osama Bin Laden would feel very welcome at Santa Monica High School,”
”This school isn’t patriotic enough”
5. He wrote down Donald Trump’s presidential inauguration speech, and oh my.. it contained some of the worst words ever used by a new U.S president during an inauguration.
Trump said in a statement in December that Miller had played a “central and wide-ranging role” in the campaign. “He is deeply committed to the America First agenda’  Trump’s inauguration speech was blasted by mainstream media organizations like CNN and NBC as “one of the most radical inaugural speeches we’ve ever heard.” and ‘shockingly divisive’.
No other president used such words in an inauguration speech before, but thanks to Miller, Trump became the first.
The speech was laced with words like;
… ripped … rusted … sad … solidarity … sprawl … stealing … stolen … subsidized … tombstones … trapped … trillions … tunnel … unrealized … bleed … carnage … depletion … landscape … overseas disagreements … disrepair … flush … infrastructure … Islamic … lady …unstoppable … urban … wind-swept.
Share on:
WhatsApp
0
Share FacebookTwitterWhatsAppLinkedinGoogle+Email