Nigerian musician, Oladapo Oyebanjo, popularly known as D’Banj has for some weeks been caught in the web of drama following the rape allegations levelled against him by Seyitan Babatayo.

Seyitan, whose arrest last week caused an uproar on popular social platforms has come out to say the musician met with her in person and asked her to tell Nigerians that the allegations were a mere publicity stunt.

She said this in a statement on Wednesday while narrating her ordeal in the custody of the Police Intelligence Response Team led by DCP Abba Kyari.

She said she was picked up by the police on June 16, 2020 and detained in a cell like a common criminal because she accused D’Banj of rape. She said she was later released to the custody of D’Banj and his team from where she was taken to a secret location and intimidated for hours.

Seyitan wrote, “On June 16, 2020, four armed policemen stormed my apartment, and arrested me without a warrant. They seized my phones, other personal effects and detained me in the police cell overnight at IGP – IRT Office at Harold Shodipo, Ikeja.

“On June 17, 2020, with various efforts, I was released from custody after being made to sign a gag order by the police and D’banj’s team, and could only post on social media what had been approved by D’banj’s team. I spent the night in a location of D’banj’s team’s choosing, which was not made known to the public.

“On June 18, 2020, I was isolated from my family, coerced, pressured and intimidated in person by D’banj and his team to retract all statements and to announce that my testimony was a publicity stunt.

“Thanks to my friend, thanks to the Executive Director of Stand To End Rape Initiative and other activists who swung into action, and tracked me to the location where I was being held by D’banj and his team, using satellite mapping. I was immediately removed from the environment and taken to a safe place where I was provided with immediate support.” 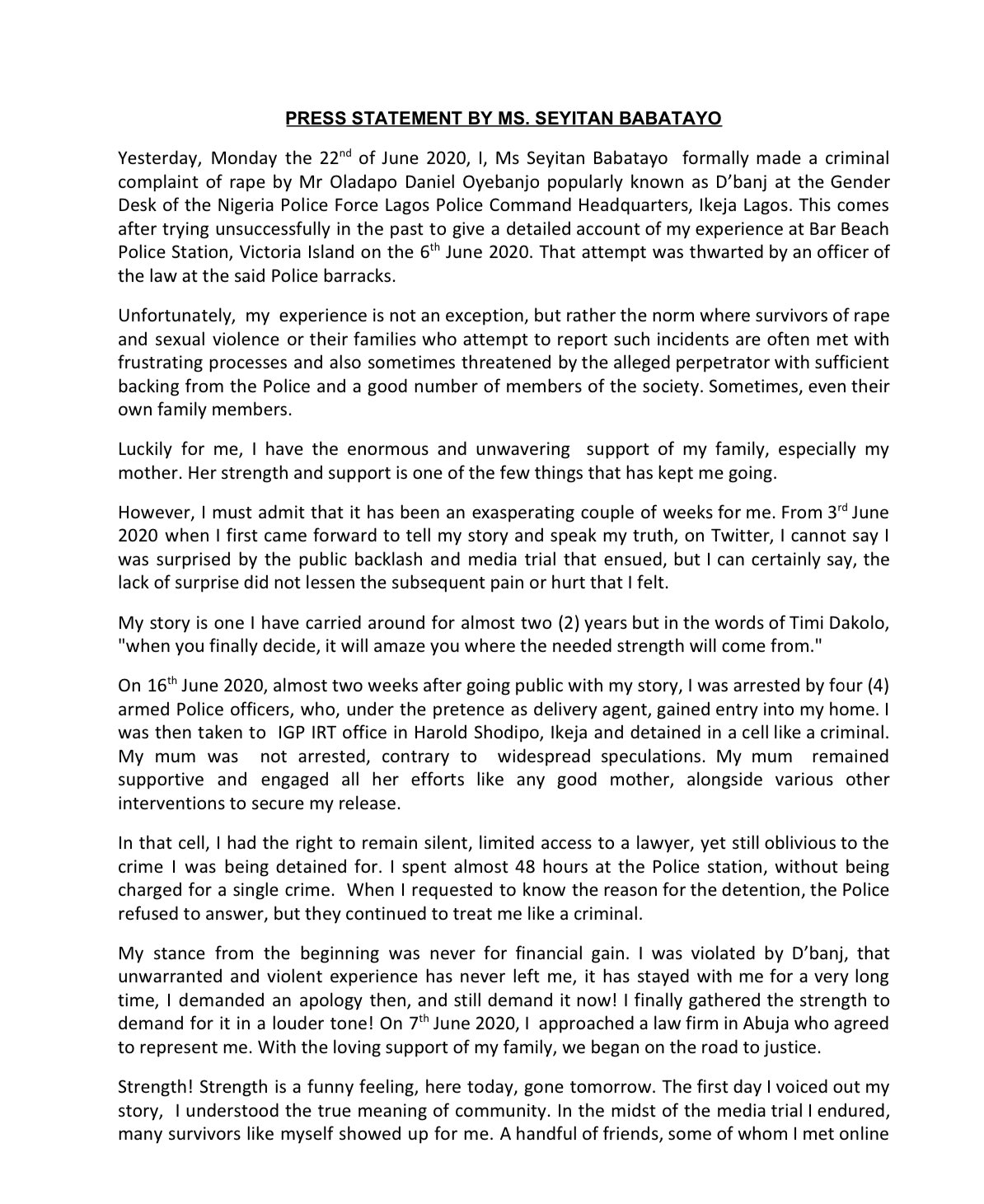 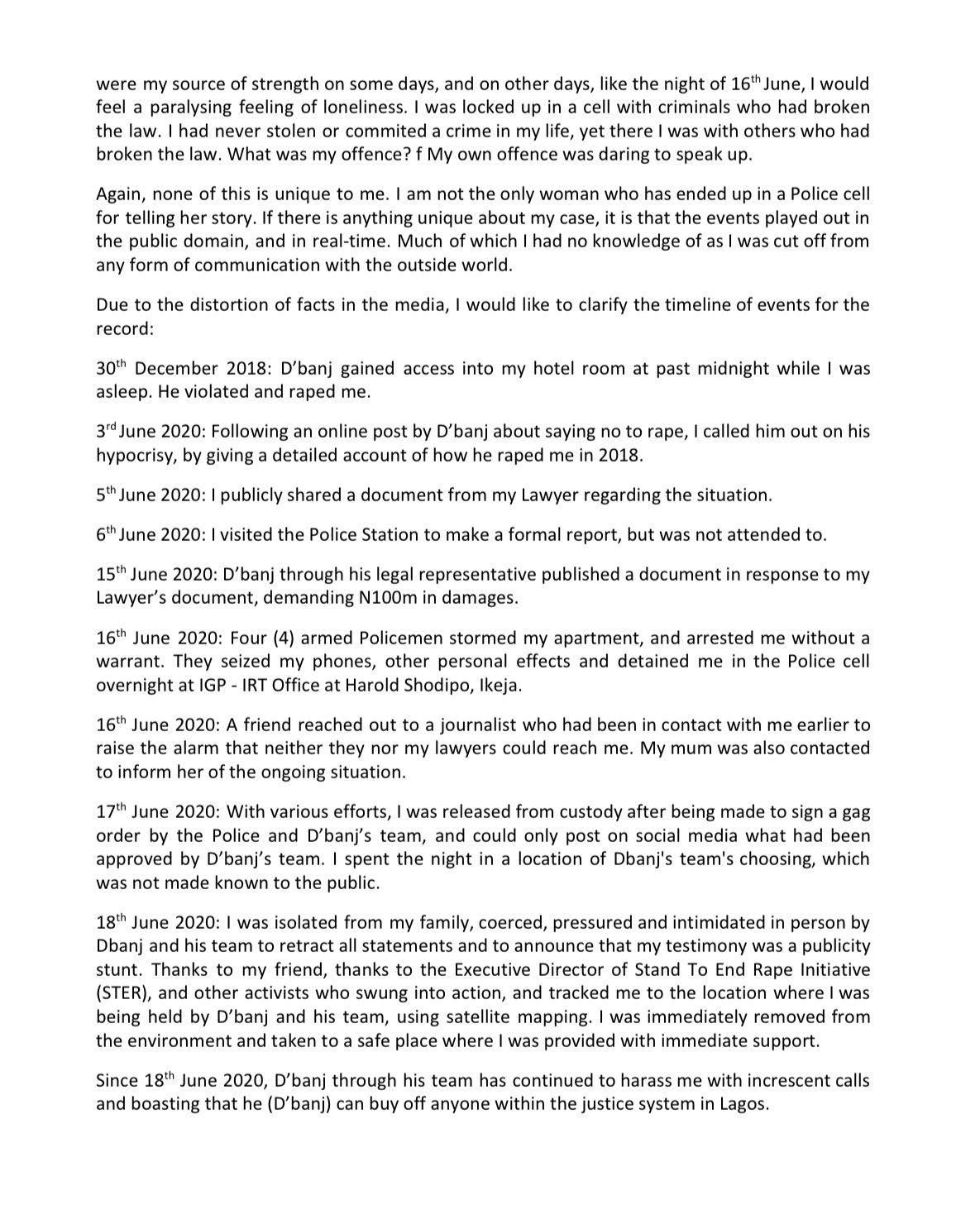 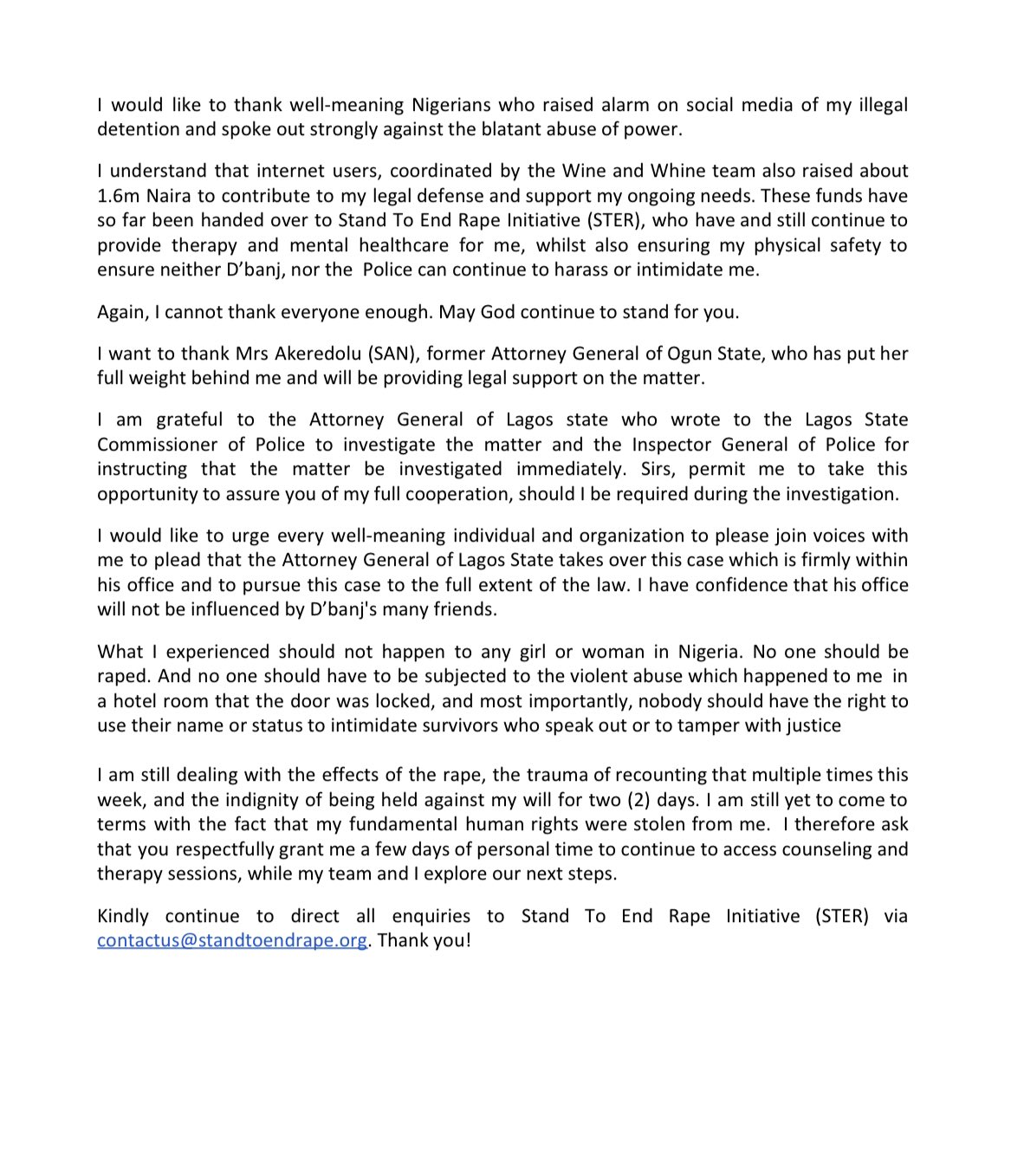 Seyitan said since her release, D’banj has been boasting that nothing would happen to him because of his celebrity status.

She thanked the Lagos State Attorney-General for asking the Commissioner of Police to investigate the rape allegations.

Seyitan also thanked Nigerians for continuing to support her even as she revealed that N1.6m had been raised from well-meaning Nigerians through an NGO- STER.

The lady had accused D’banj of raping her in her room in Glee Hotel sometimes in December 2018.

D’banj had denied the allegations, demanding a public apology and N100m from his accuser.#

Burna Boy’s ‘Twice As Tall’ Album Debuts At No. 1 in Over 56 Countries

Twitter Rant: I Have Been ‘Trying’ to Divorce Kim Kardashian For 2 Years- Kanye West