Since I went solo, I started aging backward-Mr P

Nigerian pop musician, Peter Okoye popularly known as Mr P has said his decision to become a solo artist is the best thing that has happened to him.

The singer took to his twitter page on Wednesday, December 11, 2019 to state that he is aging backward since becoming a solo artist.

By the way! Did y’all notice since I went solo and became Mr P I started aging backward…its called PEACE OF MIND and drinking more water and minding my business. Can you beat that? More of it biko. Mr P still trending on Twitter.

Why AMVCA Attendees Are Likely To Be Exposed To COVID-19

The former member of the defunct  Psquare group however, took down the post a few minutes after.

Paul and Peter Okoye which made the Psquare group were Nigeria’s biggest musical group up until they went their separate ways in 2017. 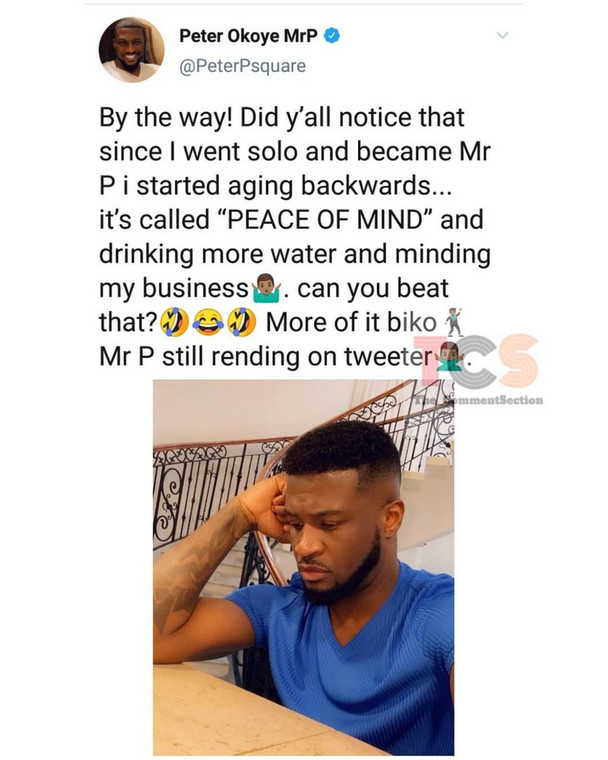 Twitter to set up ‘decentralized standard’ for social networks

#SurvivingPeruzzi: All you need to know about Davido, Peruzzi, Patrick Anyaene drama…

Cardi B seeks help from Nigerians to pick a native name

Why AMVCA Attendees Are Likely To Be Exposed To COVID-19