MSNBC host Rachel Maddow said someone leaked US President’s Donald Trump’s tax returns. Copies of the tax returns were anonymously sent to investigative journalist David Cay Johnston, a former New York Times reporter who covered the Internal Revenue Service for years and has written a book on Mr. Trump. Appearing with Ms. Maddow, he said he had received the forms “over the transom” and did not know who had sent them. He thinks it may have Trump himself. 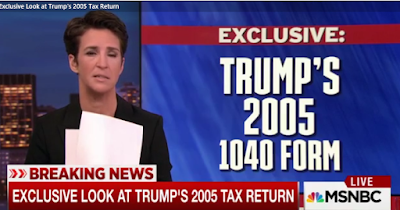 However, the White House got a hold of the documents she had and without waiting for the show to air,issued a statement that seemed to confirm the authenticity of the forms even as it defended Mr. Trump and criticised the network for publicizing them.

President Trump wrote off $100 million in business losses to reduce his federal taxes in 2005, according to forms made public on Tuesday night in a rare glimpse at documents that he has refused to disclose since becoming a candidate for the nation’s highest office.

The forms showed that President Trump paid $38 million in federal income taxes on reported income of $150 million, an effective tax rate of 25 percent, according to Rachel Maddow, who aired them on her MSNBC show. By claiming losses from previous years, Mr. Trump was able to save tens of millions of dollars in taxes that he otherwise might have owed.

The White House confirmed Tuesday night that President Donald Trump paid $38 million in federal income tax on more than $150 million in income in 2005. 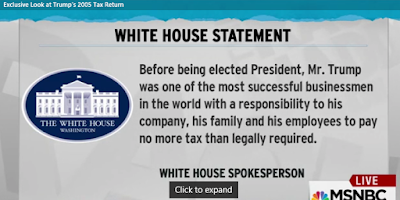 In a statement, the White House said the “illegally published” pages proved only that Trump “was one of the most successful businessmen in the world with a responsibility to his company, his family and his employees to pay no more tax than legally required.”

Then they went in on Ms Maddow for being desperate for ratings. The statement added:

“You know you are desperate for ratings when you are willing to violate the law to push a story about two pages of tax returns from over a decade ago,” the statement said.

“Before being elected president, Mr. Trump was one of the most successful businessmen in the world, with a responsibility to his company, his family and his employees to pay no more tax than legally required.” 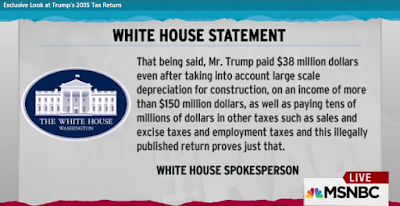 In addition to the federal income taxes, the statement said, he paid “tens of millions of dollars in other taxes, such as sales and excise taxes and employment taxes, and this illegally published return proves just that.”

“Despite this substantial income figure and tax paid, it is totally illegal to steal and publish tax returns,” the White House said.

“The dishonest media can continue to make this part of their agenda, while the President will focus on his, which includes tax reform that will benefit all Americans.”