3 Years After, Barcelona coach, Luis Enrique announces his departure from the club 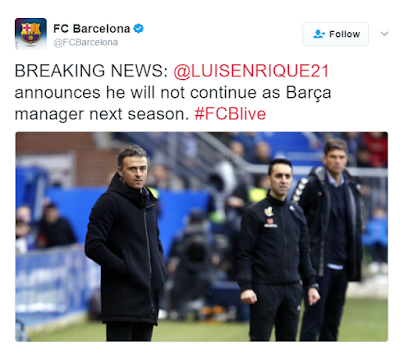 Barcelona coach, Luis Enrique will step down at the end of the season, saying he needs to “rest”. The 46-year-old, in his third season in charge of Barca, was speaking after their 6-1 win over Sporting Gijon.In his previous two seasons with the club, e won the Champions League as part of the treble in his first year and led them to a domestic double last season.

“It is a difficult, measured and well thought-out decision and I think I have to be loyal to what I think. I would like to thank the club for the confidence they have shown in me. It’s been three unforgettable years. It’s about how I live with my profession, with a never-ending quest for solutions and to improve my team. That means I have very little time to rest, very few hours to disconnect.

I think it will be good for me at the end of the season, because I need to rest. That’s the principle motive. The most important thing is we have three exciting months left in all three competitions. In one of them, we are in a difficult situation but if the stars align, we will have a chance to turn it around”, said Enrique.