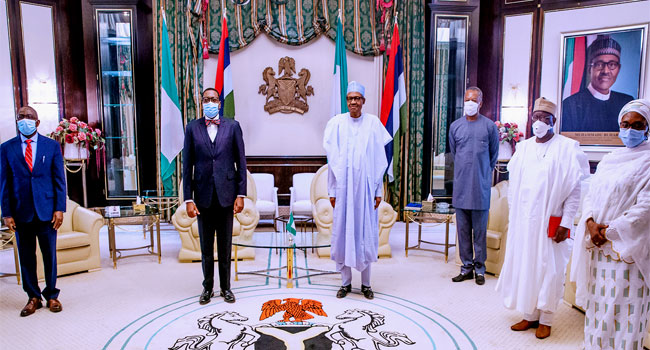 President Muhammadu Buhari on Tuesday held a meeting with Mr Akinwunmi Adesina, the President of the Africa Development Bank (AFDB).

The meeting was also attended by the Minister of Finance, Budget and National Planning, Zainab Ahmed; Minister of Foreign Affairs Geoffrey Onyeama and the Chief of Staff to the President Ibrahim Gambari.

The meeting which lasted about 45 minutes ended with Mr Adesina declining to speak with journalists.

This meeting follows a petition by a group of whistle-blowers against Adesina, accusing him of breaching AFDB’s code of conduct, some of which include private gains, impediments to efficiency, preferential treatment, and involvement in political activities.

The group, which noted their allegations were in line with AfDB’s whistleblowing policy, said these activities adversely affected the confidence and integrity of the bank.

Adesina has continued to deny these allegations, he maintained that he was innocent.

“I maintain my innocence with regard to trumped-up allegations that unjustly seek to impugn my honour and integrity, as well as the reputation of the African Development Bank,” Adesina said recently while responding to the accusations.

The Presidency hashowever assured  Adesina of Nigeria’s support in his bid to seek a second term in office as the President of the African Development Bank (AfDB).

The President gave the assurance on Tuesday through his Special Adviser on Media and Publicity, Femi Adesina, while hosting the AfDB President on a courtesy visit.

“In 2015, when you were to be elected for the first term, I wrote to all African leaders, recommending you for the position. I didn’t say because you were a People’s Democratic Party (PDP) Minister, and I belonged to the All Progressives Congress (APC), so I wouldn’t withhold my support.

“I’ll remain consistent with you because no one has faulted the step I took on behalf of Nigeria,” President Buhari said.

The President pledged that Nigeria would work with all other leaders and stakeholders in AfDB to ensure that Dr Adesina is elected for a second term based on the record of his achievements during his first term.

The African Union had already endorsed the incumbent AfDB President as the sole candidate for the continent, but some other stakeholders have held the opinion that Dr. Adesina should be re-investigated over some allegations, and rendered ineligible to run.

Dr. Adesina while giving a background on the development at the AfDB, explained that the 16 allegations raised against him were trumped up, “and without facts, evidence, and documents, as required by the rules and regulations of the bank.”

He added that while the Ethics Committee of the bank cleared him of all the allegations, a fresh investigation was called for.

“My defense ran into 250 pages, and not a single line was faulted or questioned. The law says that report of the Ethics Committee should be transmitted to the Chairman of Governors of the bank.

“It was done, and the governors upheld the recommendations. That was the end of the matter, according to the rules. It was only if I was culpable that a fresh investigation could be launched. I was exonerated, and any other investigation would amount to bending the rules of the bank, to arrive at a predetermined conclusion,” Dr Adesina added.

He stressed that the motive of a fresh investigation would be to soil his name and that of the bank.

The AfDB President, however, noted that he was proud to be a Nigerian and therefore, thanked President Buhari for his unflinching support.

“You helped me to get elected in the first place, and you have supported me robustly all along, and the African Union unanimously endorsed my re-election” he declared.

The Nigerian government has also continued to rally support for Adesina. Minister of Finance, Budget and National Planning, Zainab Ahmed in a letter urged the board of the AfDB to ignore calls for an independent investigation of Mr Adesina.

Nigeria’s Former President, Olusegun Obasanjo in a communique also called on the board of AfDB to ignore calls for an independent investigation of Adesina by the US treasury secretary.

Only Schools Designated As WASSCE Centres Will Reopen- FG